In order to understand the damaging effects that theatrical TV and wrathful depictions of God have on the brain we must first understand some basic brain circuitry.

Imagine someone cuts you off while driving on the interstate. If you get that initial fright followed by an irritable aggressive response, wanting to shout something ugly, that reaction is coming out of your primitive brain called your limbic system. If you respond by thinking, “No, I’m a Christian. I will forgive him” and then restrain the impulse to shout, such restraint is originating in your prefrontal cortex (the part of your brain right behind your forehead). 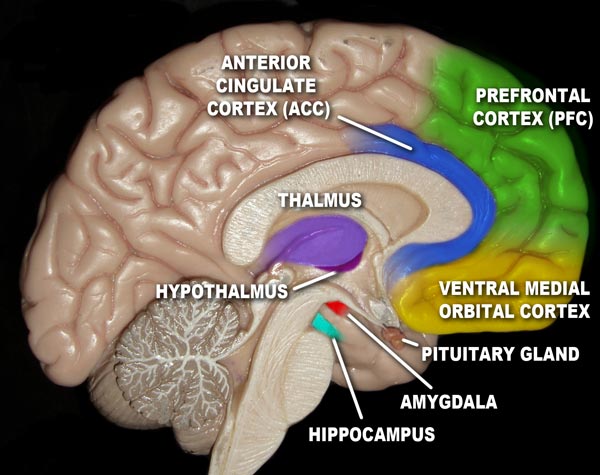 It is in the prefrontal cortex that we reason, plan, organize, focus, concentrate, and self-restrain. It is also in the prefrontal cortex that we have our conscience, experience conviction of wrong, redirect inappropriate behavior and worship. A special part of the frontal cortex, called the anterior cingulate cortex (ACC) is our neurological “heart.” It is here we experience love, compassion, empathy, sympathy, altruism and the ACC is also the seat of the will, the place we choose right from wrong. The proverb, “As a man thinks in his heart so is he” is referring to the ACC. Proverbs 23:7.

Conversely, it is in the limbic system that we experience fear, aggression, anger, irritability, insecurity, lust, envy, jealousy, arrogance and selfishness. The drive to survive, the me-first instinct of survival-of-the-fittest originates in this part of the brain. One part of the limbic system is the amygdala, which is the “alarm” or fear center of the brain. When the amygdala fires we experience fear, anxiety, panic, the classic adrenalin rush, as well as worry, insecurity, and dread.

Love is the medium of life, whereas fear is the medium of death. In a state of healthy altruistic love we think clearly and grow physically, mentally, relationally and spiritually. But when the amygdala (fear circuit) fires it causes stress hormones to surge (adrenalin and others). This causes blood to shunt from our stomach and intestines into our muscles so we can “fight or flight.” But if the blood is not in our internal organs, then we cannot absorb nutrients as well. This means physical growth is impaired. A recent study documented that children growing up in Iraqi war zones were measurably shorter than Iraqi children growing up in rural safe zones. Fear impairs physical growth!

Maybe you have known someone with test anxiety or someone who froze when trying to make an announcement. What happened? Their fear circuits fired and paralyzed their prefrontal cortex. This demonstrates how fear impairs intellectual and cognitive growth!

When something really frightens you, like smelling smoke as someone yells fire, where does your focus turn? Do you become more concerned with others or more concerned with saving self? The more fearful we become the more self-focused we become.  Fear impairs relational growth!

And because our spiritual development occurs via our prefrontal cortex, when we experience activation of our fear circuits and/or other limbic circuits, such as lust, envy, jealousy, anger, aggression, our prefrontal cortex is impaired. We become less capable of comprehending God and His methods. Thus fear impairs spiritual growth!

Theatrical entertainment (TV and movies) activate the limbic system while diminishing prefrontal cortex activity. Theatrical entertainment stimulates an emotional reaction. It stimulates you to laugh, cry, be afraid, irritable, angry, frustrated, aroused or some other emotional response while simultaneously suspending your critical reasoning. And the stronger the emotional reaction the “better” the programming. The brain and body cannot tell the difference between firing the fear circuits in a real life stressful situation or when the fear circuits fire from a stress inducing TV program. The biological consequences to brain and body are the same.

Multiple scientific studies have demonstrated that theatrical entertainment results in increased violence, sexual promiscuity, alcohol use and various mental illness such as ADHD, Body Dysmorphic Disorder, Eating Disorders and is implicated in mood and anxiety disorders. Why? A combined effect of introducing unhealthy beliefs while simultaneously damaging prefrontal cortex and over developing limbic system with subsequent unregulated fear circuits.

An imbalanced brain, with a prefrontal cortex less capable of calming the alarm (amygdala) results in damage to the body and physical health. The constant firing of the amygdala results in activation of the immune system, release of damaging inflammatory factors with damage to insulin receptors, synaptic signaling and subsequent increases in diabetes mellitus, obesity, high cholesterol, heart attacks, strokes, bone loss and inflammatory disorders. Fear is truly the medium of death!

Amazingly, recent brain research reveals that worshiping an angry and wrathful God has the same effect on brain circuitry as theatrical television watching. The only God concept that didn’t have this negative effect was a God of love! Worshipping a God of love results in calming of the fear circuits and healing of brain and body!

Research at the University of Pennsylvania by Dr. Newberg and colleagues demonstrated that subjects 60-65 years of age who meditated on a God of love, just 12 minutes a day for 30 days, experienced measurable growth in the ACC of their brains as measured with MRI scans. This was directly correlated with reductions in heart rate, blood pressure and stress hormone levels and a 30% increase in memory testing. This demonstrates the calming of the amygdala and limbic system circuitry as a consequence of meditating on a God of love. Science confirms what the Bible has told us, “perfect love casts out all fear” 1John 4:18.

But, just as strikingly, Dr. Newberg and colleagues documented that any other god concept, an angry, wrathful, distant, or punishing god did not result in growth in the ACC, and did not result in lowered blood pressure, heart rate, or improved memory. In other words, angry or wrathful god concepts do not heal the brain, improve love or enhance prefrontal cortex function. Instead such concepts activate the fear circuits of the brain and contribute to impairments in healthy growth, thinking, reasoning and judgment. One might even say that wrathful god concepts damage the brain!

This should not surprise Bible students as Romans chapter one tells us that when we exchange the truth of God for a lie the mind becomes futile, darkened and depraved. And now brain science confirms this to be true!

Just consider the evidence from history. How have those who’ve held to an angry/wrathful God concept treated others? Intolerance, coercion, execution, abuse, misrepresentation… Yes, wrong God concepts do alter the brain and impair judgment, reason and the ability to love others!

We are in a war and we battle against “everything that sets itself up against the knowledge of God and take captive every thought to Jesus Christ” 2 Corinthians 10:5. It is time we demolish Satan’s strongholds, his false representations of God and begin presenting the truth about God’s character of love.

It is the darkness of misapprehension of God that is enshrouding the world. Men are losing their knowledge of His character. It has been misunderstood and misinterpreted. At this time a message from God is to be proclaimed, a message illuminating in its influence and saving in its power. His character is to be made known. Into the darkness of the world is to be shed the light of His glory, the light of His goodness, mercy and truth…The last rays of merciful light, the last message of mercy to be given to the world, is the revelation of His character of love.  — Christ’s Object Lessons, pg. 415

Why is the final message of mercy the truth about God’s character of love? Because this is the only message which casts out fear, heals the brain, restores us to unity with our Heavenly Father and prepares us to meet Him when He comes. I invite you to examine the evidence for yourself, stand up, awaken our church, reject the distorted pictures of God and begin worshipping the only true God – the God Jesus revealed, the God of love!